' A Taste of Monterey - August West 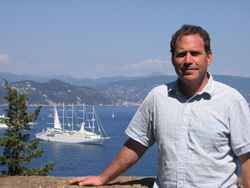 August West wines are produced in San Francisco, California by August West partner Ed Kurtzman. They moved to their new facility just in time for the start of the 2007 harvest. Previously, they made their wines at the Freeman Winery in Sebastopol, California.

With the outstanding vineyards from where they source their fruit, winemaking at August West is the least complicated part of the business. For the most part, Pinot Noir is fully destemmed and fermented in bins using a combination of ambient and cultured yeast strains. Their Syrahs are usually 100% whole cluster fermented and are almost always inoculated with a cultured yeast strain. Chardonnays are whole cluster pressed and fermented in all French oak barrels using ambient yeasts in most years. Barrel aging lasts for 10 to 11 months for the Pinots, 12 to 15 months for the Chardonnays, and sometimes up to 16 months for the Syrahs. Pinot Noir takes the highest share of new French oak at approximately 40%, with Chardonnay and Syrah seeing larger amounts of one and two year old French oak barrels and less of the new wood.

Ed Kurtzman has been making wine since 1994 where he got his start in the cellar at Bernardus in Carmel Valley, California under the guidance of Don Blackburn and Kirby Anderson. From 1995 through 1998 Ed moved across Monterey County to Chalone Vineyard where he was enologist and then assistant winemaker under Michael Michaud. Ed had the good fortune of meeting future August West partners Howard Graham and John Peterson while he was winemaker at Testarossa for the vintages 1999-2002. He was the consulting winemaker for the 2003 through 2006 vintages at Fort Ross Vineyard. Ed is currently (beginning mid 2002 vintage) the consulting winemaker at Freeman where works with Akiko Freeman and Mitchell Masotti. From 2007 through 2012, Ed made the wines for Roar. And finally, Ed started his Sandler label in 2003, and he makes those wines at August West's San Francisco winery. Ed, his wife Michelle and son Tennessee live a short bike ride away from the winery in San Francisco's Haight Ashbury district.